What’s the next step in your journey to becoming a millionaire? A top 10 richest cricketer in the world. It is no secret that most people dream of having riches and financial freedom, this list will give you some possible players in the game of cricket.

In the past twenty years, cricket has been more than just a sport, it has become an entertainment powerhouse. This list will give you a relevant perspective of the growing power that cricket has brought to its players.

Richness is not as easy as one might think, most people consider fame as richness but only a few wealthy people actually achieve it.

Here are the top 10 richest cricketer in the world:

The cricketer of the generation. After many years of cricket and still standing strong, this batsman has made a name for himself and not just in India.

This very honorable man is retire from the game but he will always be present in the minds of every cricket lover. His net worth is $170 million. A cricket legend who is one of the most celebrated and well-paid sportsmen in the world, Sachin Tendulkar can command millions of dollars at every match. The Indian batsman has been around for a long time and has been playing for almost three decades. Even today, there is no doubting his stature at the international level and he has already achieved many great milestones in his career. Tendulkar is regarded as the greatest cricketer of all time by many cricketing legends. He has been awarded the title “God of Cricket”.

MSD is a high-profile cricketer and has shown tremendous success in his career. Dhoni won the 2011 World Cup, 2 Asia Cups, etc. He’s partner with brands like Reebok and Go, Daddy. Mahendra Singh Dhoni is the second-richest cricketer globally.

India’s former captain of the national team and 2nd wealthiest cricketer globally MS Dhoni is considered the best Indian cricket player of all time. He is called Captain Cool because of his calmness on the field. His net worth is $113 million. Dhoni has partnered with various brands like Reebok, Red Bus, Go Daddy, and Orient. He is considered the best former captain of the Indian cricket team.

Virat Kohli is the world’s third-richest cricketer. He is one of the finest batsmen in the world. His gameplay is mighty, and people worldwide are crazy to watch him play on the field. In his career, Virat Kohli made 12,000 runs and 70 hundred.

Virat’s net worth is reported to be around $113 million. He is truly an inspiration for all aspiring athletes. He’s a phenomenal cricketer with a phenomenal work ethic who is steadily transforming himself into one of the greatest modern captains in cricketing history.

He is also the mentor for the DC team in IPL. Ricky is the greatest Australian cricketer and the 4th richest cricketer in the world. His net worth is report to be around $70 million. 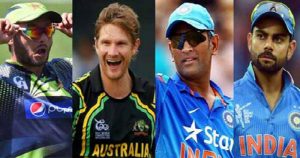 Among the top ten richest cricketers globally, Shane Warne is in the 6th position with a net worth of $50 million.

Shane Warne was the former captain of the Australian cricket team. After retirement, he started commentating on cricket matches. Shane Warne partnered with various brands like Pepsi, McDonald’s, etc. Warne is now serving as the coach of RR in the IPL.

Jacques Kallis is a popular former player of the South African cricket team. He has an estimated net worth of $48 million and is one of the most successful all-rounders of all time. He has scored a total of 25,534 international runs and took 577 international wickets in his whole career.

Sehwag is an inspiration to many and one of India’s most successful athletes. One of the more interesting things that Sehwag has done is partnering with Adidas as a brand ambassador. He has also given his personal thoughts on how any aspiring cricketer can make it in the game.

He also served as the captain of Delhi Daredevils in the IPL. Sehwag has made the fastest triple century. Sehwag is a former brand ambassador of Hero Honda. He has an estimated net worth of $40 million.

Yuvraj Singh is an Indian cricketer, who has served as vice-captain for the India national cricket team. He is also one of the top 10 Richest Cricketer in the World  He is also the son of a famous Punjabi singer, Yograj Singh, from a Catholic family.

His journey was not without hurdles: he had to overcome cancer and is a born fighter who has never back down from challenges. Yuvraj Singh is one of the wealthiest cricketers in India. He has an estimated net worth of $35 million.

Shane Watson is the richest cricketer in Australia. His net worth is report to be $30 million.  He has played for the Royal Challengers Bangalore team in IPL. Shane was a prominent member of Australia’s cricket team as an all-rounder. He has also endorsed so many brands worldwide.

Elon Musk Net Worth in Rupees : The World’s Richest Man Net Worth