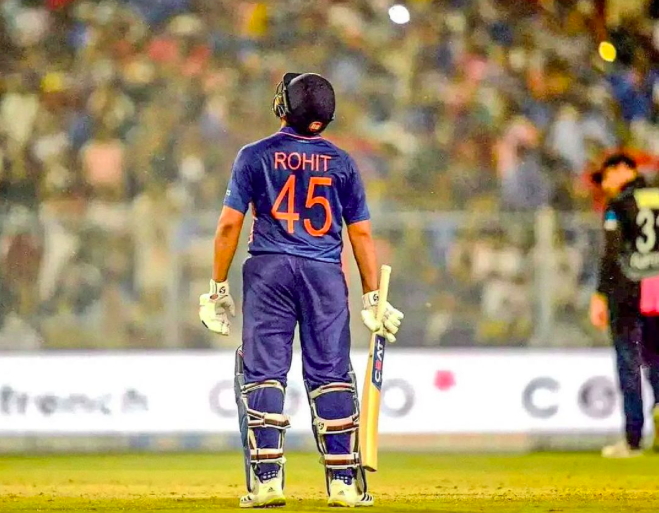 Rohit Sharma is an Indian International cricketer and is the captain of the Indian cricket team. He was born on April 30, 1987, in Mumbai.
Since his debut in 2007, Rohit has established himself as one of India’s most successful cricketers ever. He have 41 centuries and over 15500 runs in international cricket under his name.. He was the ICC ODI Cricketer of the Year 2019. Rohit is the only batsman, who scored 5 centuries in a single edition of the Cricket World Cup.
He is the current Captain of Indian Team and in IPL franchise Mumbai Indians as well. Sharma is also the recipient of the prestigious Sir Garfield Sobers Trophy. He is currently India’s captain in all three formats of international cricket.

The total net worth of Rohit Sharma is estimated to be 23.2 Million USD, which is approximately equal to 190 Crore in Indian Rupees. There is approx 7-8 million (20 Crore Rupees) per year increment to his net worth. Other than the endorsement deal, Rohit Sharma has also been featured on the covers of many magazines. These include magazines like Men’s Health, Outlook, Sportstar and many more. For a few times now, he has featured in the Celebrity 100 list of Forbes India  .

Like all athletes, Rohit Sharma does not only earn revenue from the game. The brands like CEAT and the Swiss watchmaker Hublot sponsoring Rohit sharma . Sharma was hired by CEAT to be a brand ambassador for their range of tyres in India in 2013. He had a reported deal of worth Rs. 2 crore a year and it will go on for at least 5 years. In November 2015, Rohit Sharma signed up with Swiss watchmaker Hublot as their brand ambassador in the Indian subcontinent.

He also has endorsed many other brands like Dream 11, Maggi, Lay’s, Nissan, Fair and Lovely, Adidas, Oppo mobiles, energy drink Relentless, Nasivion nasal spray and Aristocrat by VIP Industries, Quorn, and Nike India. He has also endorsed the brands like Hero MotoCorp, Disney India, Visa, and several others.

Rohit Sharma have ninth rank in the list of richest cricketers in India with a net worth of approximately 23 million USD. The list is leading with the names like Sachin Tendulkar, MS Dhoni and Virat Kohli.

Rohit Sharma’s current salary from IPL is approx 16.5 Crore per year. His total earned salary is worth 1,626,000,000 Indian Rupees

Since a long time, Rohit Sharma has also been involved in Charity related work. He is working as an active member of People for the Ethical Treatment of Animals and is also a vocal supporter for removal of homelessness in street animals, dogs and cats. For creating awareness on the plight of homeless and helping them, he also took part in the Mumbai Homelessness Challenge a little while ago.

Everything You Need to Know About Online Solitaire...

Eliminate Your Fears and Doubts About Fantasy Cricket