Venom: Let There Be Carnage

Venom: Let There Be Carnage is an upcoming American superhero film based on the Marvel Comics character Venom, produced by Columbia Pictures in association with Marvel and Tencent Pictures. Distributed by Sony Pictures Releasing, it is intended to be the second film in the Sony Pictures Universe of Marvel Characters and the sequel to Venom (2018). The film is directed by Andy Serkis from a screenplay by Kelly Marcel, and stars Tom Hardy as Eddie Brock / Venom alongside Woody Harrelson, Michelle Williams, Reid Scott, and Naomie Harris. 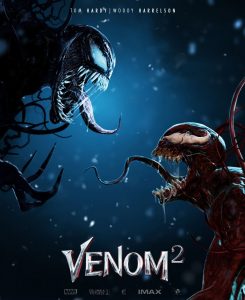 Plans for a sequel to Venom began during production on that film, with Harrelson cast to make a brief appearance as Cletus Kasady at the end of Venom with the intention of him becoming the villain Carnage in the sequel. Official work began in January 2019, with Hardy and Harrelson confirmed to return along with Marcel as writer. Serkis was hired as director that August. Filming took place at Leavesden Studios in England from November 2019 to February 2020, with additional filming in San Francisco in February. The title was announced in April 2020.

Venom: Let There Be Carnage is scheduled to be released in the United States on September 24, 2021, delayed from an initial October 2020 date due to the COVID-19 pandemic.

In April 2021, Sony signed a deal with Disney giving them access to their legacy content, including Marvel content in the Sony Pictures Universe of Marvel Characters, to stream on Disney+ and Hulu and appear on Disney’s linear television networks. Disney’s access to Sony’s titles would come following their availability on Netflix.

Principal photography began on November 15, 2019, at Leavesden Studios in Hertfordshire, England under the working title Fillmore. Robert Richardson served as cinematographer for the film, reuniting with Serkis after they worked together on Breathe (2017). Filming took place at the campus of London South Bank University in mid-January 2020. Hardy revealed that filming in England was completed on February 8, with the production then moving to San Francisco where the film is set. Location filming continued in that city for several weeks, taking place in several neighborhoods including the Tenderloin, North Beach, Nob Hill, and Potrero Hill. In Potrero Hill, the Anchor Brewery stood in for a police station, while filming in Nob Hill took place at Grace Cathedral on February 20 and 21. Filming also took place at the Palace of Fine Arts in the Marina District.

Hardy confirmed in August 2018 that he had also signed on to star in a third Venom film.

Marco Beltrami was revealed to be the composer for the film in December 2020, after previously composing for several Marvel-based films produced by Parker.

Also Known As: Venom: Let There Be Carnage

The Mitchells vs. the Machines

UP CM Adityanath orders 50 lakh doses of Covaxin, Covishield each, ahead of May 1 vaccine drive