99 Songs is a 2021 Indian multi-lingual musical romance film directed by Vishwesh Krishnamoorthy, and co-written and produced by A. R. Rahman (in his maiden production banner YM Movies), who thus makes his debut in both roles, apart from composing the original score and songs. The film co-produced by Ideal Entertainment and distributed by Jio Studios, stars debutants Ehan Bhat and Edilsy Vargas in lead roles, alongside Aditya Seal, Lisa Ray and Manisha Koirala among others portray supporting characters. The film is a sensual story about art and self-discovery of a struggling singer who wants to be a successful music composer.

Rahman had written the script for the film in 2011, with Eros International initially announced to produce the film in August 2013. After Eros backed out of the project, Rahman stated that he will produce the film under his own banner YM Movies. This film is the debut directorial of Vishwesh, who worked as an advertisement filmmaker, before Rahman offered him to direct for his production. Vishwesh, also a musician, is well-known for the Mumbai based hardcore band Scribe. The scripting and finalizing process continued till four years before the film was officially announced in June 2015. The casting process done by Mukesh Chhabra; around 1,000 auditions took place, until the makers finalized Ehan and Edilsy as the lead actors.

Production of the film silently progressed in March 2017 and ended within a year. The cinematography for the film were jointly handled by Tanay Satam and James Cowley, while editing was done by Akshay Mehta and Shreyas Beltangdy. The dialogues for the film were written by Hussain Dalal, with Gautham Menon and Kiran penned the dialogues for the Tamil and Telugu versions. For the Tamil version, G. V. Prakash Kumar and Khatija Rahman gave voice-overs for the film’s lead actors.

The world premiere of 99 Songs was held at the 24th Busan International Film Festival which was held at Busan, South Korea, where the film was screened in the Open Cinema category on 9 October 2019. The film is scheduled for release on 16 April 2021, and will be will be dubbed and released in Tamil and Telugu in the same name. 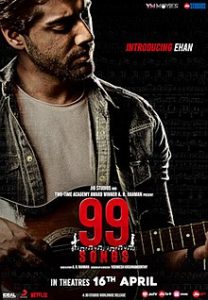 After the project was announced in 2015, the makers began casting process in Mumbai for which the production house demanded a South Indian actor to play the male lead musician who had basic understanding of music too, also adding that, the supporting cast will have international musicians and actors. A first look of the poster which released in March 2016, featured a boy flying in mid-air holding a girl’s hand in one and an afloat piano in the other, although the details regarding the lead pair were undeciphered.

Vishwesh Krishnamoorthy had planned three Pakistani actors to play the lead role in the film, but Rahman was apprehensive that it might cause problem for the project. It was due to the 2016 Indian Line of Control strike, followed by which the Indian Motion Picture Producers Association banned all Pakistani actors and technicians from working in India and many films featuring Pakistani actors which included Karan Johar’s Ae Dil Hai Mushkil,[a] faced threats from exhibtors and activists, citing this reason. With the help of casting director Mukesh Chhabra, more than 1,000 auditions took place before the makers finalized debutants Ehan Bhat and Edilsy Vargas, as the lead actors of the film in October 2017.

Ehan Bhat was trained for composing piano at Rahman’s musical institute KM Music Conservatory in Chennai for more than year, since his role required musical expertise. He was sent to Los Angeles for training from acting and success coach Bernard Hiller. The lead actors have undergone special training at a leading acting school in Hollywood. The teaser of the film released during December 2017 at a musical concert in Ahmedabad, featured the lead cast members along with Tenzin Dalha, Aditya Seal, Manisha Koirala and Lisa Ray along with renowned musicians Ranjit Barot, Rahul Ram, Thomson Andrews, Remo Fernandes among others. Rahman shared the news of the lead actor Ehan in his official instagram post on April 2019.

The background music and soundtrack for the film was composed by A. R. Rahman. The album which was in production since 2015, consists of 14 original compositions for each language (Hindi, Tamil and Telugu).The lyrics for the original Hindi version were penned by Navneet Virk, Abhay Jodhpurkar, Dilshaad Shabbbir Shaikh, Raftaar, Munna Shaukat, while the lyrics for the Tamil version were penned by Madhan Karky and Thamarai, and Telugu version was penned by Anantha Sriram.

99 Songs became the first Indian soundtrack album to be released in Dolby Atmos Technology. After two singles – the theme song from the film titled “The Oracle” and the male version of “Jwalamukhi” – were released on 7 and 21 February 2020, the full soundtrack in its entirety was released by Sony Music India on 11 March 2020.After a fan’s request to release the Tamil and Telugu versions of the soundtracks, Rahman launched the tracklist of the Tamil version on 28 July 2020, with the album being released the following day, 29 July 2020, and the Telugu version on 31 July 2020. Despite the digital release, a promotional event for the launch of both the soundtracks took place on 26 March 2021.