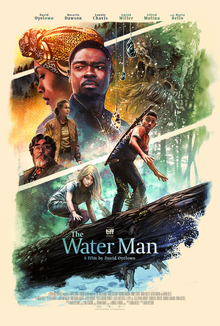 The Water Man is a 2020 American drama film directed by David Oyelowo, in his feature directorial debut, from a screenplay by Emma Needell. It stars Oyelowo, Rosario Dawson, Lonnie Chavis, Amiah Miller, Alfred Molina and Maria Bello. Oprah Winfrey serves as an executive producer via her Harpo Films banner.

The film had its world premiere at the Toronto International Film Festival on September 13, 2020. It is scheduled to be released on May 7, 2021, by RLJE Films.

In June 2015, it was announced David Oyelowo would direct and produce the film, from a screenplay by Emma Needell, with Oprah Winfrey set to executive produce the film under her Harpo Films banner, with Walt Disney Pictures distributing. In March 2019, it was announced Oyelowo, Rosario Dawson, Lonnie Chavis, Amiah Miller, Alfred Molina and Maria Bello had joined the cast of the film, with Disney no longer attached to distribute.

The film had its world premiere at the Toronto International Film Festival on September 13, 2020. In February 2021, RLJE Films acquired U.S. distribution rights to the film, and set it for a May 7, 2021, release, with Netflix set to distribute internationally.

A boy sets out on a quest to save his ill mother by searching for a mythic figure said to have magical healing powers.