Home » All about Hornbills 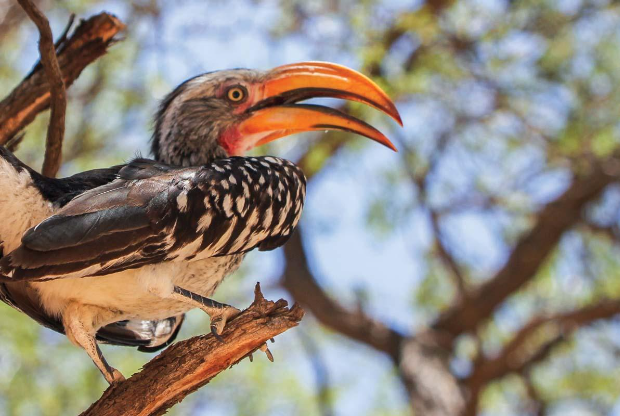 If you have recently spotted a blue hornbill bird you might be interested to learn about this species overall. While there are 9 species in India there are more around the world, in total 62, though they prefer the hotter parts of the world in subtropical Asia and Africa. Their name comes from their most noticeable feature their long and down-curved bill. This is often a bright colour and sometimes the upper mandible has a casque. They are able to carry that bill because they are the only bird that has the first two vertebrae in their neck fused together, making it stronger. Some of them are facing extinction and education and conservation efforts are needed.

Most of the Hornbills are arboreal meaning they live in the trees but there are a few exceptions. For example. The Large Ground Hornbill are as their name indicates, terrestrial birds living on the ground in the African savanna. In India specifically, Hornbills are found in dense forests and sometimes the foothills as humans impact their habits. These birds are diurnal and generally travel in small family groups or pairs rather than large flocks, though sometimes they do form outside of breeding season and roosting sites. They are known to have a loud call but each one has its own unique voice.

There is a lot of variation in their size and what they look like from one type of hornbill to another. A blue hornbill bird is identified by its colours, but not all are blue and there is an amazing range of colouration, bill length, wingspan and more. The smallest is the Black Dwarf Hornbill at just around 100 grams and 30 cm long all the way to the 6.2 kg and 1.2 m Southern Ground-hornbill. Males are larger than females though by how much varies. In all cases, their most stand-out feature is their bill. It helps them fight, build their nests, preen and be more successful in how they catch their prey.

One of the things that make the Hornbills stand out is the casque the structure that is on the upper mandible. It varies between different species how much that stands out and it does not have any other function apart from strengthening their bill. Some have hollow casques, some have colourful casques, and some have ivory-filled casques that enable them to use their bills almost like battering rams. The plumage is another area that varies quite widely. A lot have more dull plumage, browns, whites, greys, blacks and then splashes of bright colour elsewhere. Some have more throats and faces that are more colourful than others. On those faces, they tend to have large eyelashes to protect their eyes from the sun. They have binocular vision which helps them with precise hunting and handling of food.

What do they eat?

Hornbills eat small animals, insects and fruit so they are omnivorous. Their tongues are too short to allow them to eat any food caught with the beak’s tip so they toss the food to the back of their throat with a strong jerk of their head. Hornbills are very important as seed dispersers. Some are territorial, defending an area where they are able to find food. That can be a long distance though for those that prefer fruit so those species tend to be less territorial.

The species found specifically in India are;